The YYYs Conquer the City 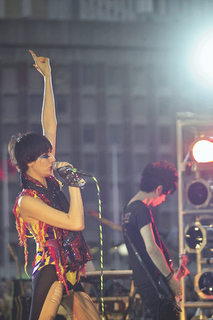 Boston is conquered
by the Yeah Yeah Yeahs.
The engimatic Karen O sings while Nick Zinner jams out on guitar.
photograph by Chris Dempsey, Boston Phoenix

Just hours after the people of a half-dozen cities along the American eastern seaboard found themselves wrapped in fear due to the announcement of the latest terrorist plots to attack US and British passenger planes, the people of Boston attending the free Yeah Yeah Yeahs show in City Hall Plaza were set free.

The music was liberating and it was damn loud.

The Yeah Yeah Yeahs stormed Boston on Thursday playing a free show sponsored by WFNX radio and The Boston Phoenix. Unbelievable is my best description. To put it simply, I didn't realize I needed to see a Yeah Yeah Yeahs show before I died - but I really did. What a brilliant showing!

The early show attendance count was 10,000-plus people - but I have a feeling that number may have been conservative to appease safety officials. (The entire city hall plaza was jammed with people and the surrounding streets feeding into Faneuil Hall marketplace were bustling with tourists and dinners.)

I was disappointed to miss all but the tail end of opening band TV on The Radio (NYC).

TV on the Radio

I have some of TVOTR's music and have heard so much positive feedback about their live performances from friends in New York that it was a let down to miss their set. (A note to planners: For weekday shows, how about giving motorists, commuters and the rest of the working world an extra half-hour to get to the show? It was frustrating being stuck in traffic knowing I was missing a good show just a couple miles away.)

As it ended up, TV on the Radio would make an unannounced appearance at the end of the Yeah Yeah Yeahs set which, sadly, did not do either group adequate service. Karen O's decision to bring the New York band out was well-conceived, but ill-planned. (The microphones on the now-crowded stage - seven individuals - popped and creaked while the voices of the musicians sounded out of phase.) Still a disappointing closing did nothing to dampen the amazing show that was. The YYY slashed through several "classic" songs and some tracks from their new album "Show Your Bones"

Gold Lion from the "Show Your Bones" album

(Show opener and remarkably strong... Karen whatever happened to opening the show with a safety song?! Wow. Right out of the gates!)

Cheated Hearts from the "Show Your Bones" album. (video)

Miles Away from the "Yeah Yeah Yeahs" album. (video)

And Maps from the "Fever to Tell" album.

"This is a love song," Karen told the crowd, and she went about dedicating it to the people of Boston!

The brick, stone and humanity surrounding the band made for an interesting backdrop as daylight fell and the stage lights shined to the beat of Brian Chase's drums.

Set for their return: The band left Boston with a lasting impression
photo credit: Nina Blass

The band was joined onstage for about a third of their songs by Yeahs touring guitarist Imaad Wasif. Imaad is a former member of the 90s alternative band The Folk Implosion.

The Yeah Yeah Yeahs are considered by the world to be a New York City band, but last night's show was a homecoming for guitarist Nick Zinner, who grew up here. Zinner played exceptionally well for the hometown crowd and reluctantly but politely waved when the lead singer put her guitarist on the spot by mentioning that his family was in the crowd.

The band travels to New York today to perform a two-night stand.

* Photograph contributions from friends are greatly appreciated (and encouraged!) I have a number of YYY pictures to share and will do so in an upcoming post. Please contact me if you are going to a live show and will have pix to share.

You’ll be notified when there is new content or free downloads!